Complete Guide to Facebook Games – How to Play, Cheat, Delete and More 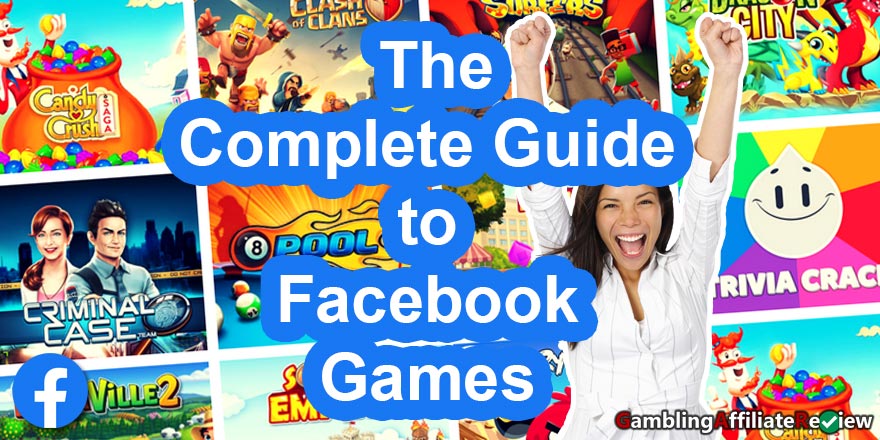 If you want to learn all about games on facebook you’ve come to the right place! In this massive guide we will tell you everything you need to know; from playing the games to removing them from your timeline, blocking notifications and using cheat engines. Yes, you can actually cheat in some facebook games! Use the navigational buttons below to get to the section you are looking for.

Also read: Our 10 favorite casino slot games on Facebook to pass our time on

As you may or may not already know, there are thousands of card, board and arcade games that can be played for free on facebook. You may not have notice them though as they actually aren’t accessible through mobile devices, but only through computers. However, this doesn’t mean that you can’t play them on your smart phone or tablet. Let us explain how to do it.

To play games on a computer all you have to do is to click on a button that says games, which you will find in the left hand sidebar menu of facebook. This is also how you get games back that you’ve previously played but removed.

Once at the game section you can sort games by a bunch of different categories. You can also search on a specific title should you like to find a facebook game that you’ve played before or that you know is fun.

As a mobile user you unfortunately don’t have the luxury of browsing through a long list of games on facebook as you have using a computer. To play facebook games on an iphone, iPad or Android device you simply have to search on a specific title and download the game using the Google Play or App Store.

Once you have done this, the game can be synced to your facebook account by simply opening it up and pressing a button that says connect or login with facebook. Exactly where this button is located will vary from one game to another.

The facebook arcade is a software that can be downloaded to Windows to play many of the games that are available on facebook. This platform is similar to Steam and is only focused on games, which means that you won’t see anything else that is connected with facebook.

It’s a great software to use if you don’t want to be bothered by ads or you’re having trouble playing games in your web browser as the performance is better. For instance, if your facebook games are running slowly, this is how you can speed them up.

Many of the games that are played on facebook using a computer doesn’t support fullscreen mode, but only to be played in a window. However, if you want your games to appear larger there is one thing you can do:

– Use the fullscreen option in your web browser

Most, if not all, web browsers have a fullscreen mode which zooms in on the actual page you are viewing or in this case game you are playing. With Google Chrome and Mozilla Firefox you toggle this on and off by simply pressing the F11 key. This will allow your facebook games to be played in full screen.

If facebook games aren’t loading for you or you simply can’t play them there may be several reasons to why, though the solution is usually an easy one. Below we have listed four possible explanations to why you can’t play your games on facebook and how to fix it.

1. You are running an old version of Flash

These days HTML5 technology is replacing Flash, but it may be that some games still require Flash to run properly. To make sure this isn’t the reason to why your facebook games don’t load, we suggest downloading the latest version of Adobe Flash Player.

Whether you are using Google Chrome, Mozilla Firefox or any other web browser they all save data from your browsing history. This is known as cookies and cache and sometimes this causes unexpected problems. It may be why facebook games won’t connect and work properly for you. What you need to do is simply clearing cookies and cache in the web browser you are using. This can also help to speed up facebook games that are running slowly.

3. You are running an ad blocker plug-in

Some games are supported by ads that run when they are being loaded. If you’re running an ad blocker this may prevent your facebook game from loading. Simply turn it off and see if it solves the problem for you.

It’s possible to block all games on facebook, though if this was the problem you would probably know. However, to make sure you haven’t done this, head over to settings, then apps and websites and lastly check the box that says apps, websites and games. If this is turned off, this is the problem. You need to turn it on.

Following the below step-by-step guide will stop the games you’ve played from posting on your facebook wall. You can also choose to have all previous posts about the games removed from your timeline. If you want to block the ability to play any kind of game or turn of game notifications from your friends, we have explained how to do this further down in the article (click here).

This Is How You Remove Facebook Games on PC

Before explaining how single facebook games are blocked, please note that this can only be done using a computer. If you only have access to facebook through a smart phone or tablet, you can choose to remove the facebook game instead. Scroll up to see how you do this. Now here’s the step-by-step guide for blocking:

This Is How You Block ALL Games on Facebook

If you’re bothered by invitations from facebook friends that want you to install games that you have no interest in, you can easily turn this feature of. You can also disable the ability of being able to play any games at all on the apps platform should you like to. Below we have described the process of doing this, which includes PC as well as Mobile.

To turn off notifications;

Please note that blocking all facebook games have other implications than just not being able to play them. You will disable all apps, which means that you won’t be able to login to websites that are connected through your facebook. It may even be that your account with that website will be lost.

Unblocking facebook games is easily done by just following the steps described above. If you’ve blocked a single game, all you have to do is to press an unblock button by going to settings, blocking and then the box that says block apps.

If you’ve blocked all games altogether or turned off notifications, just go to settings followed by apps and websites and turn things on again.

Whether you are bothered by ads or it is your recently played facebook games that are showing in the sidebar, there are two things you could do to try and get rid of them. The first thing is changing your ad settings on facebook.

From here you are able to change several things. You can choose to hide facebook games that are listed which will prevent them from showing in the sidebar. You can also click on ad settings to turn off data being collected from you, which the ads are based on.

As facebook survives on advertisements, we cannot guarantee that this will remove sidebar games and ads altogether. It might, but if you want to be sure to get rid of the facebook games on your sidebar you need to look for an external solution and not one within facebook.

What we’re talking about is installing an ad block plug-in to your web browser. There are several different ones to choose from, but one that we can recommend is AdBlock. This is compatible with Google Chrome, Mozilla Firefox, Internet Explorer, Safari, as well as iOS and Android devices

Facebook does of course not like these types of plug-ins and they constantly try to render them useless by improving their website. So if you find facebook games in your sidebar even after installing an ad blocker, this means that it is outdated. If so you could try with another one.

If you want to hack a particular facebook game to give you an unfair advantage in the game there is an easy way do so with a simple cheat engine. All you need is Firefox as a web browser and a special extension plug-in that you download to it. You can find out all about this by going to leethax.net which is the website that is developing the cheat.

Before you download anything, you should know that the cheat engine only works to hack the following facebook games:

On the leethax website you can read all about the advantages you can get in these games.

Can Facebook Games Be Hacked Without a Cheat Engine?

No, not as far as we know. If it’s possible it’s certainly a well-kept secret. Though there isn’t really any need to hack the games without the engine as downloading Firefox and the extension is very quickly and easily done. It shouldn’t be too much trouble for someone looking to cheat.

How do I get rid of games on facebook?

You can either remove single ones that are bothering you on the timeline or you can block all of them. Additionally you can also choose to only turn of game notifications that you are getting from friends. Whatever you want to do, this is done under settings by going to apps and websites.

A solution to speeding up facebook games is downloading the facebook arcade, which is a software that offers better performance than playing in your web browser. Alternatively, you could try clearing cookies and cache in your browser, which is often the problem when things are running slowly.

How can I sync facebook games with my phone?

Once the game is downloaded to your iOS or Android device, just open it up and click on a button that says connect or login to facebook. It may be that this button is hidden somewhere in the settings menu so you may have to look around a bit to find it.