How to play Teen Patti 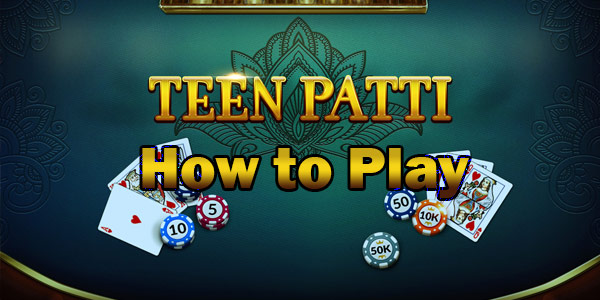 Teen Patti, or Indian Poker as it’s been lovingly dubbed, has always been the staple game for generations of Indians. There’s a common saying, if you’re an Indian and haven’t heard of Teen Patti, you’re not Desi enough, and yes indeed, this game is a phenomenon! Once you begin playing Teen Patti, you’ll understand why it made its way onto the online gambling scene, both in India and beyond. Let’s have a look at how to play Teen Patti.

The game is played with between four to eight players, and a dealer that hands out the cards. Before the game begins, all the players decide by lot who will be the first dealer.

For the next stage of the game, the players put up the ante before the dealer hands out the cards. Once all the bets have been made, the dealer carefully shuffles the deck and hands out a card to each player counter clockwise, until every player has three cards.

The player on the left of the dealer begin the game while the rest of the players respond according to the strength of their card combinations. When the betting process ends, there can be no more than 2 remaining players. The last 2 players then open their cards and the best-ranking hand wins the pot.

How to bet at Teen Patti

When the game begins, the first player to the left of the dealer makes the bet. As the bet size depends very much on the status of that player, Blind Players and Seen Players have different options.

Blind players are those that after the cards have been dealt to them, choose not to look at their hand before betting. According to the Teen Patti official rules, if another blind player is sitting in front, they will have to participate in the betting by betting the same amount or an increased amount. However, this can’t be done more than twice. If however the front player is sitting with a Seen player (a player that chose to see their cards after they were dealt), then they should bet half or equal the amount.

Betting rounds continue until only one or two players are left at the table and after a showdown, the stronger Teen Patti sequence wins. If both players have an equal hand then the player that has asked to see the cards loses.

How to wager free spins