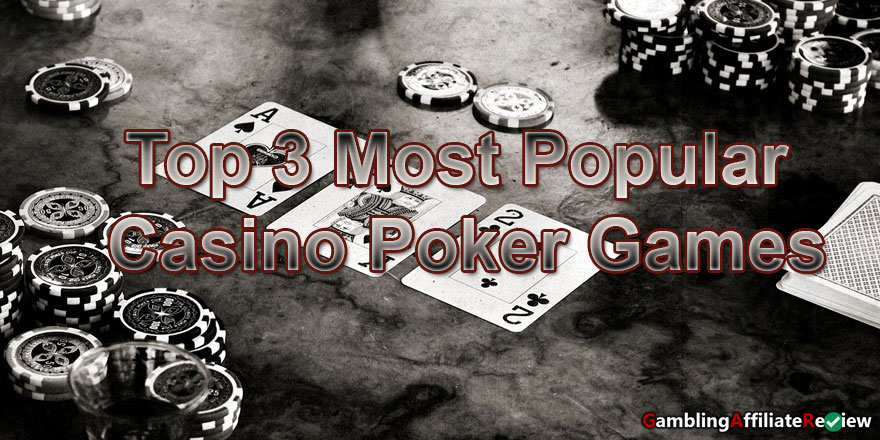 Many poker players have led a crusade against the media and gambling authorities under one motto: poker is a game of skill and not a game of chance. This is crucial for the entire industry because it affects the way gambling is regulated around the world.

However, like it or not, it’s easy to confuse poker with casino games. It is mostly played in brick-and-mortar casinos worldwide; it involves cards, bets, and stories of persons who turned little money into millions. The main difference between skill poker and casino poker is that the first one is played between people, and the second one is played against the house.

In this article, we will take a short trip to the most popular poker variants played in casinos.

Twenty-four years ago, Derek Webb patented a new casino game: 3-Card Poker. Since then, it has become one of the most popular poker variants, and you can play it at virtually all brick-and-mortar casinos and well-known online operators like 888Casino.

As the name implies, the player gets three cards and clashes the dealer’s hand. After peaking his hole cards, the player can either fold or pay to keep playing. If the dealer has at least a Queen, both hands will be compared, and the winner will be determined according to the classic poker hand rank.

Caribbean Stud Poker has been played in casinos for over 20 years, and its rules are patented. Since then, the game has become widely popular and can be played both live and online.

The player and dealer get five-hole cards. Before seeing any card, each gambler must pay an ante. After this, the dealer will show one of his cards, and players can check their cards. Then another round of betting ensues, and both hands (player and dealer) are compared if the house has at least AK.

Pai Gow Poker is a game invented by an American based on a Chinese game (Pai gow), hence its Asian name. The original is played with dominoes, but the casino variant is played with a regular 52-card deck and a joker.

Although Pai Gow Poker is played by seven people (six players plus the dealer), the goal is to beat the banker, who can be anyone at the table. The cards are dealt in seven piles, and each player is randomly given a hand that must be split into two, one with five cards and one with two cards. After a round of betting, all hands are compared, and the best one wins the bets.

In this article, we have talked about only three poker variants that are played in casinos. However, as soon as you walk in the door, chances are you will see many other games based on the basic rules of poker.

We cannot conclude if poker is a game of skill or a game of chance, but we highlight that casino poker variants are crucial for the industry because to remain popular, it must be fun.